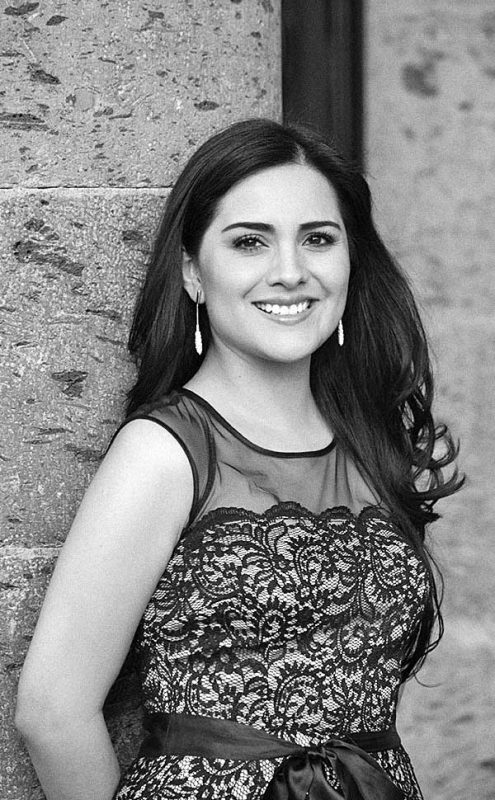 Born in Mexico, she is a mezzosoprano who graduated from the Domingo-Colburn-Stein Young Artist Program at Los Angeles Opera. She has been awarded several prizes such as Carlo Morelli Competition, Maria Callas Award, Opera de Bellas Artes Award, the Domingo-Embil Zarzuela Award, the National Competition of Young Voices in Bel Canto, among others.

She made her debut at the MET in 2015 becoming the youngest Mexican opera singer to do so with the company. She has shared the stage with Plácido Domingo and performed in several Opera Houses around the world.

Some of her Rossini roles include Cenerentola in La Cenerentola, Isabella in Italiana in Algeri, Rosina in Il Barbiere di Siviglia, Isolier in Le Comte Ory, Lucilla in La Scala di Seta, and Ernestina in L’Ocassione fa il Ladro.
Other roles also include Charlotte in Massenet’s Werther, Mozart’s Cherubino in Le Nozze di Figaro, Dorabella in Cosi Fan Tutte. She also debuted at the Carnegie Hall singing Mozart’s Mass in C minor. She performed as Tamiri in Vivaldi’s Farnace at Spoleto Festival and made her debut at the New York City Opera in Cruzar la Cara de la Luna. She has been awarded contracts with the Metropolitan Opera House for five consecutive years including 2020.

During her engagements for 2014-2015, she debuted at Los Angeles Opera as Mercedes in Bizet’s Carmen, 2nd Lady in Mozart’s Die Zauberflöte,

Myrtale in Massenet’s Thaïs sharing the stage with Maestro Plácido Domingo and the World Premiere of Jonah and the Whale.

Her recent performances include productions such as Madama Butterfly, Simon Boccanegra, Rusalka, Idomeneo, The Merry Widow, Suor Angelica, and Iolanta. She will be back for the 2019/2020 season to cover Nerone in Agrippina and Cenerentola in La Cenerentola.