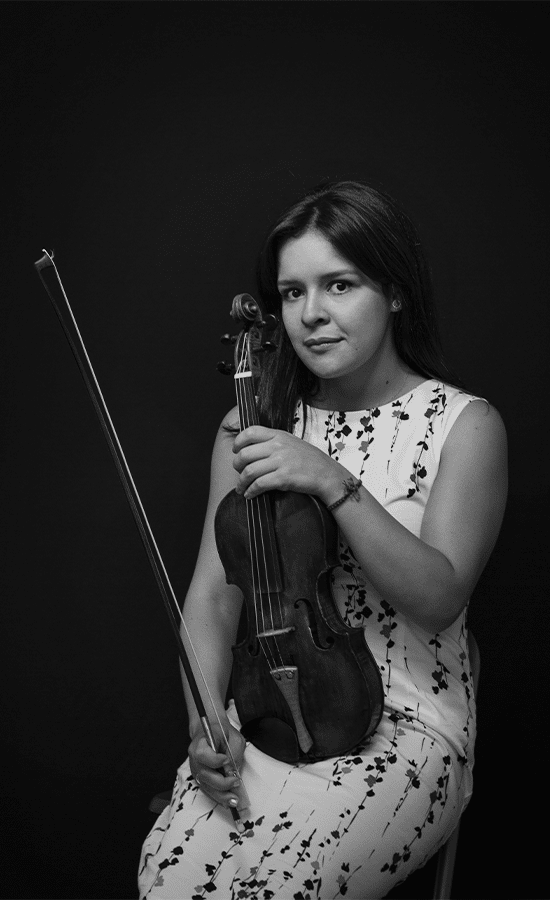 Venezuelan violinist who graduated with distinctions in Violin Performance from the Royal School of Music in London. She became part of the Venezuela’s National System of Youth and Children’s Orchestras and Choirs, named “El Sistema” and also of the Latin American Violin Academy of Venezuela.
She developed her musical career at a very young age as concertmaster violin of the Teresa Carreño Youth Symphony Orchestra and as a guest of the Simón Bolívar Orchestra of Venezuela. Additionally, she performed as a concertmaster of the International Youth Orchestra during the celebration of the 69th anniversary of the United Nations.
In 2015, Olivo was invited by the São Paulo State Symphony Orchestra in Brazil and simultaneously she also performed with top conductors such as Claudio Abbado, Rafael Frühbeck de Burgos, Gustavo Dudamel, Sir Simon Rattle, Marin Alsop, among others and touring with important orchestras around America, Asia and Europe.
After developing a career as a soloist with a wide repertoire, she performed in different theatres such as Teatro Auditorium Manzoni, Teatro Municipal Valli, Victória Hall, Opernhaus Zürich, Stavanger Konserthus, Folkets Hus Hudiksvall, Gävle Konserthus, Sala São Paulo, Moravská filharmonie Olomouc, Teatro Teresa Carreño, Teatro Degollado, and more. Since 2016 she has been a soloist concertmaster violin with the Jalisco Philharmonic Orchestra, under the direction of conductor Jesús Medina.